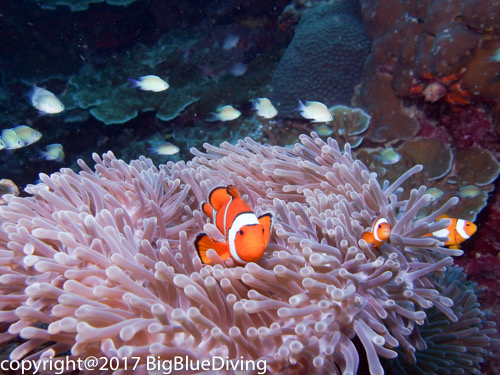 The weather looked nasty for this Similan liveaboard trip. Day three especially with 3-4m waves forecast for the Andaman Sea. Day three, the day we usually head up to Richelieu Rock and the area of sea most likely to be effected by bad weather.

Rather than skipping Richelieu due to conditions later in the trip we were going to dive there first before the bad weather arrived. Hats off to the decision makers, bad weather can be an easy excuse for some companies to save a bit of money on fuel but our boss was insistent our guests get to dive Thailand’s premiere dive site.

As we did the trip the wrong way round, from north to south, I’m going to do the same for this Similan liveaboard trip report and make it about our other national park, the Surin National Park where were to spend all our entire first day.

MV Hallelujah departed from Tap Lamu as usual, but instead of heading west to the Similans we headed north west for the long haul through the night to the Surin Islands. We needed an easy dive site close to Richelieu Rock for our first check dive and Surin would do nicely.

It has been a while since I dived at the Surin Islands and even when I have had the opportunity to dive there in the past I’ve probably only logged a maximum of 30 dives or so at a few random sites. The site I remember the most is Turtle Ledge, also known to our captain so that was to be our check dive choice.

Dive One at the Surin Islands

Jumping in the water at the Surin Islands it is instantly clear to see why this is the preferred snorkelling destination compared with the Similan Islands. The Similans have the well known name and reputation for snorkel trips but the Surin Islands have something the Similans sadly lack, pristine hard coral reefs that rise to around one to two metres below the surface.

Lobed pore coral gardens dominate the shallow waters, followed by bush, maze, staghorn and table corals as you descend deeper. Like a lot of the Surin dive sites, Turtle Ledge is a relatively shallow dive with the reef meeting the sandy seabed at around 18-20m. At this depth there large gorgonian fancorals attached to granite boulders.

It was a nice, leisurely dive just drifting along with the current. Although the fish species we saw were generally the same as seen in the Similan Islands, it was interesting to see them in different habitats and differing quantities. We saw a couple of the more interesting species, including the Andaman or Magnificent Foxface and tomato anemone fish.

The highlight for me was spotting a juvenile Shaded batfish. The Surin Islands is the only location I’ve ever seen these.

With our check dive completed it was time to head over to Richelieu Rock, by far the best site within the Surin National Park and in Thailand. At this point in the trip the wind was picking up, there were some waves at Richelieu but nothing MV Hallelujah couldn’t handle with ease. With the weather still holding out it was a nice surprise to find only one other boat at the dive site.

Diving Richelieu is amazing right now. It’s always a great dive there but so far this season it is even better than ever. We ended the 2016-2017 Similan diving season with Richelieu Rock on similar form. Often during the low season things change at our dive sites, but this year it seems like diving there continues on the fine form we ended on last season and it gets better week by week.

There is the usual amazing array of colourful soft corals, the anemone gardens, large sea fans and an absolute abundance of dazzling reef fish that make Richelieu Rock a world class dive site. However it is the millions upon millions of glass fish that surround the rock that, in turn attract larger pelagic fish life that is adding that extra excitement.

Everywhere you look there are numerous species of trevally, barracuda, emperor fish and snapper roaming around the rock continually harassing and feeding on the glassfish.

My favourite are the juvenile giant trevally, with their mirror like sheen, darting around the rock in a blur of silver. The productivity at Richelieu is simply breathtaking. 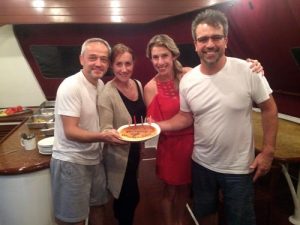 It’s always nice to have some honeymooners on board our Similan liveaboard and this time we had two couples with us. Once more, congratulations and good luck Fernanda and Abrahao and Emeline and Stephane from all of us on Hallelujah 🙂 A big thank you to everyone who joined us for trip number 8, this is the one we beat the weather, had some great dives and saw Richelieu Rock at it’s stunning best. All we need now are some whale sharks.

Have Fun With Big Blue